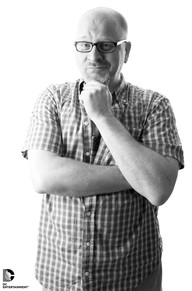 Cully Hamner has drawn many things for many publishers, but he's probably best known for his creator-owned comic RED, which was adapted as a pair of hit Bruce Willis films; for co-creating Jaime Reyes (the current BLUE BEETLE, also about to be a feature film); and his work on THE QUESTION. His list of credits at DC is about as long as your leg-- most recently as cover artist of BATMAN: REPTILIAN; for covers on books like BATMAN SECRET FILES: THE SIGNAL and JUSTICE LEAGUE; and interiors on books like FUTURE STATE: SUPERMAN OF METROPOLIS, SUPERMAN RED & BLUE, and BLUE AND GOLD. At Marvel he’s recently provided numerous covers for the SPIDER-MAN titles, BLACK PANTHER VS. DEADPOOL, WAR OF THE REALMS, YONDU, and the recent M.O.D.O.K. series.